In our guide for the Morphy Richards Soup and Smoothie Maker, model number 501016, you’ll learn about the included features and benefits, and what sets it apart from other soup makers. You’ll find that a lot of the Morphy Richards soup maker range appear quite similar at first glance, so it’s important to identify those subtle differences to help you make a decision. 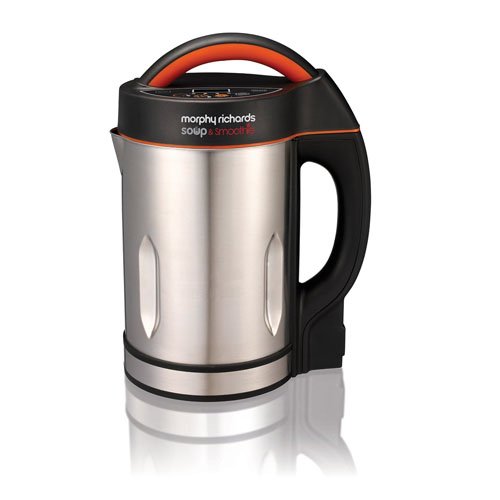 First and foremost, our top recommendation from this brand is the 48822 model, which is one of their old and trusted versions. It’s not that the 501016 model on this page is lacking in any way, in fact it’s slightly superior to the older 48822, but in terms of cost, the older model is often available for a much cheaper price tag. We wanted to be clear about that up front – if you want a simple to use soup maker with no frills, be sure to check out that review too. If you’re looking for something a bit more versatile, read on.

Features Of The Morphy Richards 501016

As a general overview, buying a Morphy Richards machine will allow you to get started quickly – they’re simple and intuitive to use, so you can get to soup making straight away. As we mentioned a moment ago, this choice also offers a little extra functionality – it’s also a smoothie maker too.

Let’s take a look at each of the main features in a little more detail.

The operation of the 501016 falls broadly into four categories, each having their own control panel setting.

The digital display on the top of the lid counts down as the machine progresses through soup making. While we don’t advise leaving the soup maker completely unattended, it does mean you can turn your attention elsewhere as it cooks, knowing roughly how long you’ve got before your soup is ready to eat.

This kettle chamber holds up to 1.6 litres per cooking cycle, which is roughly four servings. Of course, if you like a bigger bowl than average then the servings will vary, but we typically consider serving sizes of 300-500ml as normal, with children at the lower end and adults at the higher end of the range.

A big gripe with devices like soup makers is how easy they are to clean. Any soup maker can end up with food burned to the inside, but it’s avoidable in most cases. Typically remembering to use a small amount of oil to ‘grease’ the chamber before loading in the veg is a good idea. Similarly, taking a moment after use to rinse out the vessel and clear the majority of debris for the blade and lid is wise, and give it a quick wipe with a warm soapy cloth or sponge.

Where people go wrong is failing to clean it properly between uses, and getting a slow build up of layer upon layer with each use. It’s not a big job if you clean it quickly after use, whereas it’s a much tougher effort later if you forget!

While more and more soup makers use a similar approach, it’s not all of them so worth mentioning. Having the lid mounted blade means that it lifts right out of the chamber of the machine, making cleaning much easier that the old blender style soup makers, where you had to try and spin the blade to clean under it in the bottom of the jug. This way, it’s easy to clean the inside of the soup maker as well as the blade, which lifts out completely clear of obstructions, and you can see what you’re doing!

We’ve had a good look through customer reviews to get their thoughts on the 501016, and we’ve collated the main themes below.

A good place to start is the general feel that you can learn to use this soup maker really quickly. Of course, a good soup is going to come down to two things, the soup maker itself and also the ingredients that go into it. Knowing people find it easy means you’re covered for the first part, leaving you to enjoy experimenting with the second!

There’s a number of reports that the machines have burned out and needed replacing. Looking at the dates on these reviews, it seems to be heavily focused around late 2018 and early 2019, so perhaps was a problematic batch.

There’s enough reports floating around the online reviews to mention it, but they definitely seem to be less common recently. It’s also important to remember that there’s always a small chance that any product will fail, so good to know Morphy Richards offer guarantees to sort out the problems that occur – remember to register your product on their website as detailed in the box.

Make A Batch, Freeze The Rest

It’s not a specific point relating to this soup maker, but we noticed a couple of reference to people who live on their own making a full batch and splitting up the results to freeze. It’s not something we’ve tried, but according to the real world customers who battle test these machines, the verdict is it’s still good reheated!

A really important point is that unless you buy a soup maker that’s designed to cook raw meat, this one doesn’t do that. It’s easy to assume that because the soup kettle heats soup it would cook meat, but you risk it not getting hot enough to be safe to eat. For that reason, always cook raw meats before putting them into the machine.

Get A Good Recipe Book

People new to soup making recommend getting a book to help you get started with making soup. It’s a good idea if you’re not sure which ingredients will go well together. In time, it’s fun to experiment, but there’s a strong argument for using tried and tested recipes with your new soup maker until you get the hand of it all.

We’ve got a page on soup maker recipe books if you’re interested in grabbing one.

The 501016 Morphy Richards soup maker is a great choice if you’re looking for a bigger product to make multiple portions. Whether that’s for a family meal or you’re doing a number of meals to enjoy later, just over 20 minutes will take you from raw ingredients to soup in a bowl.

This is a step up from the popular 48822 soup maker, and a little more expensive. If you want to take a look at the cheaper model, you’ll find our review of it here. Otherwise, the 501016 is a great buy for those that can afford to spend a little more. Check out the current price on Amazon here: