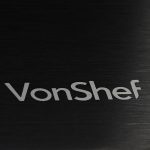 This is our in depth review of the VonShef 800W Jug Soup Maker. As our favourite model from the budget kitchen appliance manufacturer, it ranks very well in our pick of the top UK soup makers.

While it’s more likely to appeal to occasional soup eaters and newcomers to the world of electronic soupmakers, that doesn’t mean it’s lacking in terms of its results, as you’ll find out as you make your way through this review.

It does have a few more negatives than the Morphy Richards 48822, but this machine is often cheaper, so if you’re on a budget, be sure to read on and then take a look.

So, what should you expect to learn on this page? Quite simply, we’re aiming to bring you a full run down on what’s good and lacking in this soupmaker, in terms of features and opinions, and most importantly a summary of the views of people that have bought and used this product.

Whilst we have our own perspective on what the 800W offers, we really dive into customer comments too in our section ‘The Customer View’ below.

We’ve said it before in reviews and we’ll say it again, soup makers have a fairly narrow range of features, but that doesn’t mean they all have everything included.

In general, you tend to get what you pay for, but as a low priced model, does that mean this VonShef Jug Soupmaker is severely lacking? Actually no…

Not The Fastest, Not the Slowest Either

The 800W doesn’t get the job done when it comes to soup-making as fast as this Morphy Richards or this Tefal, but it does out perform plenty of lesser models that cost a lot more.

Twenty five minutes is all it takes to make its way through the quicker programmes, but you do need to allow over half an hour for the longer ones, which doesn’t stack up well against some of the rivals. That said, if you’re very price conscious, it is only a few more minutes, so the saving in price might more than compensate.

Chunky Or Smooth – It’s Your Choice

This is one of those universal features, but worth a mention. A simple choice of consistencies is all it takes to choose your cooking programme, and that will determine (mainly) the amount of time the programme takes.

There are a few other options too, which we’ll get to in a moment, but the key soup preparation choices are as simple as chunky or smooth.

The 800W will also act as a blender too – great if you’ve not got a stand-alone machine for that purpose. In fact, some previous customers have actually bought a soup maker to replace a blender that’s reached the end of its life, simply because it’s not much more expensive. More on that later.

Following closely on from the blend function, it’s worth pointing out that this VonShef soup maker is capable of creating smoothies, cocktails and juices as well as liquidising ingredients for making delicious sauce that are as thick or runny as you need.

Unlike cooking on the hob, after the heating process is complete, the soup maker does a great job of keeping your soup warm.

Under ideal conditions, that should give you over an hour to enjoy your creations, possibly even up to an hour and a half before the temperature falls to below eating temperature.

Of course, we’d recommend timing it to meal time, as it’s best as fresh as possible, but it’s good to know that the interruption of a phone call or unexpected visitor won’t ruin the effort and ingredients you’ve invested into your lunch!

While the soup maker is designed to cook your soup, if you’re making soups with meats in, be sure to cook them before placing them into any soup maker.

There’s a risk of food poisoning if the meat doesn’t get hot enough, and soup-makers aren’t designed to cook meat (unless they specifically state otherwise). It’s not worth taking the chance!

It’s always good to know that manufacturers of electrical equipment have put a lot of thought into what could go wrong – especially when it’s an appliance that you’re inevitably going to pour liquid into!

In the case of this soup maker, there are safety features to stop the soup boiling dry (for example if you try to set it going empty or with too little in the way of liquid or ingredients to complete the selected programme).

There’s also detection for the opposite problem – overflow. The last thing you want is your soup bubbling over – for three reasons!

Firstly it will impair (or ruin) the quality of your soup. Secondly, it’s going to make a mess. Thirdly, and finally, if you’re holding the appliance when it overflows, that could cause a nasty burn, so at the very least you want the soup maker to be alerting you.

Here’s our favourite section, as we move from features to opinions, and there’s some very opinionated people out there!

That’s right, this isn’t our view, although we may add to points to explain them in more detail, it’s the previous customer summary!

Read on to see what real customers have had to say, we’ve rounded it all up and brought it to you in our condensed form.

This machine has gone down particularly well with people who live on their own, couples and smaller families – more so that larger ones. Some customers talking about making large volumes and freezing half the resulting batch to enjoy later.

Just be careful not to use ingredients that have been previously frozen or carry a food poisoning risk if you’re going to do the same!

One of the more unusual ideas that cropped up is to use the machine with a timer plug that activates the machine on a timer. That means you can have soup ready and waiting to be cooked ahead of time, and set the machine to spring into life as required.

It’s probably something that we should advise against setting up to use while you’re out of the house, but we’re just risk averse souls here at SoupMakerZone.com!

There’s a lot of love among the VonShef 800W soup maker owners for the smooth soups, frequently described enthusiastically for its silky smooth qualities.

It’s not all positive, and we think it’s important to reflect that in our reviews. Several customers have voiced their frustration at the difficulty in cleaning the machine after use.

It’s certainly more prone to sticking than the Morphy Richards 48822 and the Tefal BL841140 we mentioned earlier, but as always it does depend on the ingredients you use.

Cheese as an ingredient can be a particular culprit that results in feeling like you’re chiselling it away afterwards.

As you might expect from a cheaper machine, you can’t have everything.

The 800W doesn’t include a digital countdown to the moment your soup is ready, so if that’s something you want, this won’t be for you. There is an audible completion signal, so that’s what you’re listening out for, but you know what they say about a watched pot – I wonder if the same applies listening to a soup maker?

The Souped Up Summary

Quite simply, this is a good choice of soup maker if you’re not looking for the best of the best and like a bargain.

If you can stretch to the Morphy Richards 48822, then you’ll get more, but you probably need to compare the prices at the time you’re reading this, as it’s often quite a step up.

For the price, this is a really impressive machine, so if that’s the kind of frugal shopping you like, why not check out the price now: